In Greek Mythology Poseidon (“husband”) was the god of the sea, known to the Romans as Neptune, and to the Etruscans as Nethuns. He was also the god of earthquakes and horses. Benthesikyme was sometimes mentioned as his sister.

Worship
In the Aegean world, Poseidon existed before Zeus and the other Olympic gods. Besides the familiar Olympian Poseidon, brother of Zeus, the familiar, trident-wielding sea-god accompanied by nereids and tritons blowing conch shells, Poseidon had a role in Minoan/Mycenaean cult, as Posei das, “Lord of the Goddess.” Scratched notations at the Mycenaean palace-city that Homer called “sandy Pylos,” using the Minoan syllabary we call Linear B, record sacrificial goods destined for “the Two Queens and Poseidon” and to “the Two Queens and the King.” This is the pre-Olympian role of Posidon, linked with Demeter/Persephone.

Similarly, Poseidon was one of the caretakers of the Oracle at Delphi before Olympian Apollo took it over.

Sailors drowned horses as a sacrifice to Poseidon.

Role In Society
Sailors prayed to Poseidon for a safe voyage. When in a good mood, Poseidon created new islands and calm seas. When in a bad mood, he struck the ground with his trident and caused chaotic springs, earthquakes, drownings and shipwrecks.

In Art
Poseidon’s chariot was pulled by a hippocampus or horses. He was associated with dolphins, tridents and three-pronged fish spears (tridents).
He lived in a palace on the ocean floor, made of coral and gems.

Appellations
Poseidon was often referred to with the epithet Poseidon Enosichthon (“earth-shaker”).

In Rome
Neptune was worshipped by the Romans primarily as a horse god, Neptune Equester, patron of horse-racing. He had a temple near the race tracks in Rome (built in 25 BC), the Circus Flaminius, as well as one in the Campus Martius. Only July 23, the Neptunalia was observed at the latter temple.

Birth and Childhood
Poseidon was a son of Cronus and Rhea. Like his brothers and sisters save Zeus, Poseidon was swallowed by his father. He was regurgitated only after Zeus forced Cronus to vomit up the infants he had eaten. Zeus and his brothers and sisters, along with the Hecatonchires, Gigantes and Cyclopes overthrew Cronus and the other Titans.
When the world was divided in three, Zeus received the earth and sky, Hades the underworld and Poseidon the sea. 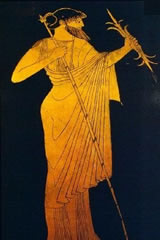 His wife was Amphitrite.
Poseidon fell in love with Pelops, a beautiful youth, son of Tantalus. He took Pelops up to Olympus and made him his lover, even before Zeus did the same with Ganymede. To thank Pelops for his love, Poseidon later gave him a winged chariot, to use in the race against Oenomaus for the hand of Hippodamia.
Poseidon once pursued Demeter. She turned herself into a mare; and he became a stallion and captured her. Their child was a horse, Arion.
Poseidon had an affair with Alope, his granddaughter through Cercyon, begetting Hippothoon. Cercyon had his daughter buried alive but Poseidon turned her into the spring, Alope, near Eleusis.
Poseidon rescued Amymone from a lecherous satyr and then fathered a child, Nauplius, by her.
A mortal woman named Tyro was married to Cretheus (with whom she had one son, Aeson) but loved Enipeus, a river god. She pursued Enipeus, who refused her advances. One day, Poseidon, filled with lust for Tyro, disguised himself as Enipeus and from their union was born Pelias and Neleus, twin boys.
With Medusa, Poseidon had sexual intercourse on the floor of a temple to Athena. Medusa was changed into a monster and gave birth to Chrysaor and Pegasus.
After raping Caeneus, Poseidon fulfilled her request and changed her into a man. 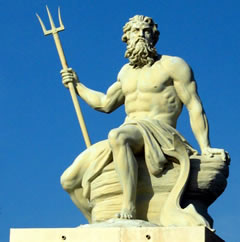 Athena became the patron goddess of the city of Athens, in a competition with Poseidon. They agreed that each would give the Athenians one gift and the Athenians would choose whichever gift they preferred. Poseidon struck the ground with his trident and a spring sprung up; the water was salty and not very useful, whereas Athena offered them an olive tree. The Athenians (or their king, Cecrops) accepted the olive tree and along with it Athena as their patron, for the olive tree brought wood, oil and food. This is thought to remember a clash between the inhabitants during Mycenaean times and newer immigrants. It is interesting to note that Athens at its height was a significant sea power, at one point defeating the Persian fleet at Salamis Island in a sea battle.
Poseidon and Apollo, having offended Zeus, were sent to serve King Laomedon. He had them build huge walls around the city and promised to reward them well, a promise he then refused to fulfill. In vengeance, before the Trojan War, Poseidon sent a sea monster to attack Troy (it was later killed by Heracles).
Poseidon is best known for his hatred of Odysseus, preventing his return home to Ithaca for many years..